While being supervised by volunteers Adrienne Franke, Ken Zheng and myself, these students at Preclarus Mastery Academy Charter School in St. Louis were given the opportunity to make music on popular instruments their own way.

After initial setup and noise-making on the each of the instruments, taking turns, this jam in particular transported a student on keyboards to an altered state and had me racing for the camera.

The drummer shown here had this beat in mind and went straight to the set to bring it to life.  I suggested he use the hi-hat or ride cymbal to keep time in addition to the rhythm pattern he was playing on the toms, but that effort distracted the “flow” of what he was doing otherwise, so we didn’t pursue it too much.

In this section, he is only playing what can be done with the sticks.  Hopefully he’ll be able to incorporate the pieces of the set that use foot pedals – the hi hat and kick drum – on future sections or songs. 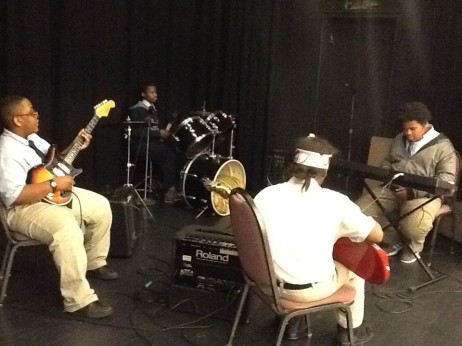 The guitarist prides himself on his ability to care for the guitar that we let him bring home over the weekend.  He says he takes really good care of his AirSoft gun, so we can trust him.

The keyboardist really got enthusiastically silly with this jam.  Awesome to see them having this much fun, and it’s definitely contagious.  When band mates see this kind of energy and expression (either from each other or an audience) they “free up” as well – a necessary starting place for creativity.

The girl playing bass here had been working on this riff for the past few weeks.  After the second day of our sessions she told me her dad plays too, and I think she’s been practicing at home.  She is all in, and her dedication is an example to the rest of them.

A student told me last Friday that he had started taking drum lessons now, going to his instructors house and practicing on a small electronic set at home.

If it’s true that these kids are becoming inspired to pursue music making on their own then this project is becoming a huge success.